The Unexplained: An Illustrated Guide to the World's Natural and Paranormal Mysteries 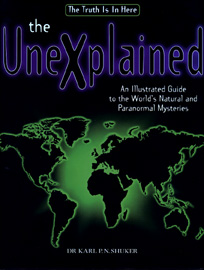 Available from the publishers and all good bookshops, including Strange Bookshop at Maryland, U.S.A., Amazon.com , and Amazon.co.uk 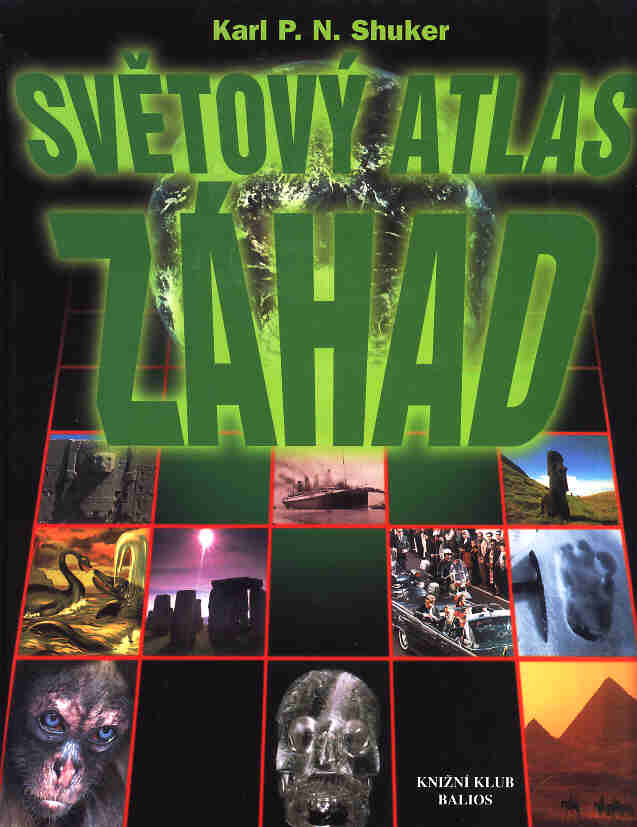 Other foreign-language editions include a Russian edition and a Mexican-Spanish edition. 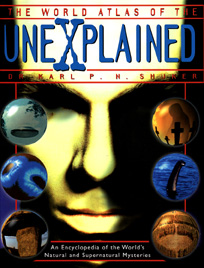 The World Atlas of the Unexplained: An Encyclopedia of the World's Natural and Supernatural Mysteries. (Lomond: London, 1996; ISBN 1-85868-233-9). Hb, 224 pp, colour pics, refs, index. Available from the publisher and all good bookshops.

This is the Scottish edition of The Unexplained, which retains the original choice of title for that book. However, despite its different title, dust jacket, publisher, and ISBN, its contents are identical to those of The Unexplained.


The Unexplained takes its readers upon a breathtaking cosmopolitan safari in search of the strange and inexplicable, but what gives this book such a positive advantage over all others in this genre is the structural format of its contents - which are grouped not by subject but by geographical locality. Consequently, by focusing upon each major region of the globe in turn, not only the major mysteries but also many of the far less familiar yet no less fascinating anomalies and enigmas of each such region are unveiled and examined.

The result is a uniquely diverse panorama of the uncanny and unexplained, in which lake monsters, sacred relics, extraterrestrials, ghosts, werewolves, levitating saints, ancient cities, ball lightning, abominable snowmen, zombies and other mystifying but famous phenomena are revealed and reviewed alongside an unrivalled array of hitherto neglected yet equally controversial mysteries - ranging from winged cats and green cats, shrieking and milk-drinking statues, flying snakes, blue-skinned humans, and vampire trees, to glowing mummies and mummified crocodile boys, stones that emit lethal beams of laser-like light, mothmen and lizard men, magnetic mountains, living UFOs in the skies, electrocuting death worms in the desert sands, vanishing islands adrift in the oceans, and other wonders far too numerous to list here.

As might also be expected from a book written by a prolific author who is a qualified scientist too, its multifarious subjects are entertainingly presented but also rigorously examined, in search of plausible solutions to their tantalising and tenacious riddles. Add to this a gorgeous selection of illustrations plus an extensive bibliography, and the result is a compelling kaleidoscope of magic, marvels, and mysteries from the four corners of the world to amaze and astonish even the most sceptical or cynical of readers. What more could anyone ask?

"In addition to being one of the world's foremost cryptozoologists, Shuker is also a dedicated fortean and this book gives him a chance to display his knowledge of the full range of mysterious phenomena... Travel the world of the weird with Shuker - you couldn't have a better guide. This is the fortean book event of the year."
Strange Magazine, Summer 1996.

"This book is absolutely superb... I have no problem at all in describing this book as 'Essential'. It is one of the best books I have read all year, and I cannot praise it highly enough."
Animals and Men, December 1996.

"An excellent introduction to the unexplained, this book covers all our favourite paranormal phenomena, together with many lesser-known theories... The illustrations and photographs are well-chosen throughout, and the text makes a point of offering potential explanations for all of the phenomena it describes (some of the theories are very recent)... We recommend it to anyone interested in the paranormal."
Uri Geller's Encounters, December 1996.

"Some 500 aspects of perplexing phenomena from nature and 'beyond nature' are cleverly examined in a book which has an absolute wealth of colour photographs and the latest theories... This is done in a fair and balanced manner as one would expect from Karl Shuker who stands, I think, with his feet firmly placed in both worlds, the explained and the unexplained... Deliberately thought-provoking, The Unexplained will stir your imagination with its mix of myths and hard facts that go a long way to proving there's no smoke without fire despite fakes, forgeries and fallacies. A fine book for believers and sceptics alike."
Western Morning News, 24 December 1996.

"A balanced, beautifully illustrated overview of the great variety of fortean mysteries by one smart zoologist. Shuker's other books are also recommended, especially In Search of Prehistoric Survivors."
Patrick Huyghe, 'The Anomalist Awards for the Best Books of 1996'.

"Shuker confidently stimulates interest without pandering to credulity. Carlton have done him proud on the presentation with maps, colour photos and an impressive layout; each page finding the right balance of text and graphics to fan those fires of interest. Karl Shuker's Unexplained is an up-to-date and worthy successor to Phenomena (by John Michell and myself and long out of print) as a reliable grounding in the variety of phenomenal mysteries. It makes a splendid gift book for anyone with a budding interest in Forteana."
Bob Rickard, Fortean Times, January 1997.

"There's a lot of telling in this book, and a lot of showing as well. Every one of its large, coffee-table book size pages is lavishly illustrated, and filled with concise but complete recountings of oddities from everywhere. While it would make a wonderful first book on the topic for someone just beginning to realize that there is "something else," it will more than satisfy the jaded long-term student of the bizarre... You'll also find it is a good reference book for what you already know. With a decent index, and all the familiar pictures, you'll be able to whip it off the shelf to refresh your knowledge when the need arises... I can wholeheartedly recommend it."
Bufo Calvin, Strange Magazine, Summer 1997.

"Lavishly illustrated, it is not only perhaps, the most attractive book that I have seen on the subject of mysterious phenomena worldwide, but one of the most wide ranging... I have a sizeable library of books on the paranormal and mysteries generally, and it never ceases to amaze me that people like Karl still manage to come up with material which is new to me, and which is still uniformly high quality... Ignore it at your cost!"
Jon Downes, Sightings, July 1997.

We have here a lavishly illustrated banquet of vintage Forteana... What a great labor it must have been to locate all of the full-color illustrations that jump out from the pages of this weighty, large-format book."
William Corliss, Science Frontiers, September/October 1997.