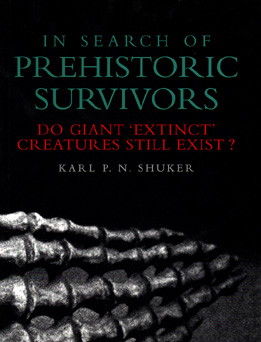 Available online from Amazon.com and Amazon.co.uk

The annals of contemporary science contain many recently-discovered living creatures - such as New Zealand's tuatara (a lizard-like dinosaur contemporary), and that famously archaic lobe-finned fish the coelacanth - which belong to ancient animal lineages once believed to have vanished long ago from our planet. By extension, these 'living fossils' provide strong evidence for believing that all is not what it might seem in the world of orthodox zoology.

Naturally, there is no suggestion that a veritable 'Lost World' of prehistoric survivors is waiting on the wings to be uncovered by a true-life Professor Challenger. Nevertheless, as revealed by renowned zoologist Dr Karl P.N. Shuker in this ground-breaking book, there are so many reports and sightings worldwide of unexplained animals strongly resembling various long-extinct creatures that it would be rash to dismiss entirely the likelihood that certain prehistoric lineages do indeed have elusive modern-day representatives still awaiting formal scientific discovery.

Traversing the frontiers and backwaters of science, this major work of cryptozoology (the scientific study of mysterious, unexplained animals) will make us all take a hard new look at what might still be sharing our world - from the mountain jungles of western Africa, and the inhospitable deserts of central Australia, to the skies above North America's Midwest, and the depths of the all-encompassing oceans - and is amply supplemented by thought-provoking illustrations, together with an extensive bibliography.

"Let me explain why this book is so outstanding. First, the exceptional scholarship which is not only comprehensive, but also scrupulously accurate, sets this book apart. Second, the analyses of data are always well balanced, compellingly reasonable and objective, without becoming boring or tedious. Last, the presentation and literary style provide a clear, understandable text even to non-professionals but is never 'written down', so that it is acceptable to scientists as well... Shuker has demonstrated encyclopedic zoological knowledge, the application of which has provided a well-reasoned, compelling argument for the identity of many of the cryptids in this book. Throughout, Shuker's approach is strictly scientific without ever relying on questionable explanations. This book will undoubtedly be a great inspiration and reference."
Professor Roy P. Mackal, quoted from his foreword to this book.

"This is quite simply the most important cryptozoological book to have been published in English since Bernard Heuvelmans's On the Track of Unknown Animals first saw the light forty years ago. It is nothing less than a detailed description of dozens of possible, and probable, 'prehistoric survivors', which may still exist in the less well trodden parts of the globe... a logical, meticulously researched, but massively entertaining book on general cryptozoology which should act as a benchmark for the next forty years."
Animals and Men, November 1995.

"In this fascinating work of cryptozoology, Dr Shuker has gathered information on reported animals around the world... this is an indispensable volume for everyone interested in undiscovered animals. Shuker has done a massive amount of research and shown that in some cases (such as that of the Australian marsupial tiger or yarri) the evidence is much stronger than is usually thought. Very well illustrated and almost impossible to stop reading."
Matthew Bille, Exotic Zoology, January/February 1996.

"Run, don't walk, to your wallet, to extract payment for this fine collection of fact, lore and science of the cryptozoological kind... One of the most competent, empathetic and enthusiastic works in all of cryptozoological literature, In Search of Prehistoric Survivors will surely become one of your most jealously guarded possessions."
Arcturus Books, April 1996.

"Shuker takes us on a voyage of exploration every bit as exciting as his previous books on cryptozoology. Shuker's literary style provides us with a good read. Nothing boring here. The balanced analyses of the data sets out the facts and likely explanations in a well reasoned manner which at no time relies on questionable explanations. Pure cryptozoology here, then; a masterful book, far more exciting than science fiction. Excellent colour and black and white illustrations enhance the text."
Western Morning News, 2 April 1996.

"Karl Shuker has done it again... In Search of Prehistoric Survivors, a straightforward examination of the idea that creatures from ancient times might have survived into the present, is an excellent addition to the library of any zoologist, biologist or cryptozoologist... The man has energy, insight and a detailed approach that enriches his field... Few books deserve their place on my cryptozoological 'classics' shelf, but this one certainly does. Acquire it before it disappears to make way for his next one."
Loren Coleman, Fortean Times, June 1996.

"This is a book as rare as the strange creatures it describes - you can open to any page and not be able to put it down until you've either finished it or been dragged away by force. Karl Shuker is no stranger to fans of cryptozoology, having written three previous books on the subject, including the hugely popular The Lost Ark. In this volume he has outdone all those earlier works and given us a book that is on all counts the most superb in its field since Bernard Heuvelmans's classic On the Track of Unknown Animals a quarter-century ago... Shuker, a professional zoologist of high standing, updates all these discoveries and adds many new mysteries in this enthrallingly written yet flawlessly scientific account. Enjoy."
Andrew E. Rothovius, Fate, September 1996.

"In Search of Prehistoric Survivors could well be considered the cryptozoologist's handbook... an encyclopaedia of historical reports and evidence of encounters with large species of reptiles, birds and sea creatures which appear similar to fossilised remains of prehistoric species. There are plenty of photos of confirmed encounters plus some personal reports from eyewitnesses. The writing style is accessible and makes for a fascinating read."
Encounters, December 1996.

"Probably the widest-ranging and most satisfying work by the cryptozoologist most likely to step into Heuvelmans's shoes."
Mike Dash, '100 Essential Fortean Books', Fortean Times, July 1997.

| Books | Dragons | In Search of Prehistoric Survivors | The Unexplained |