Mysteries of Planet Earth: An Encyclopedia of the Inexplicable 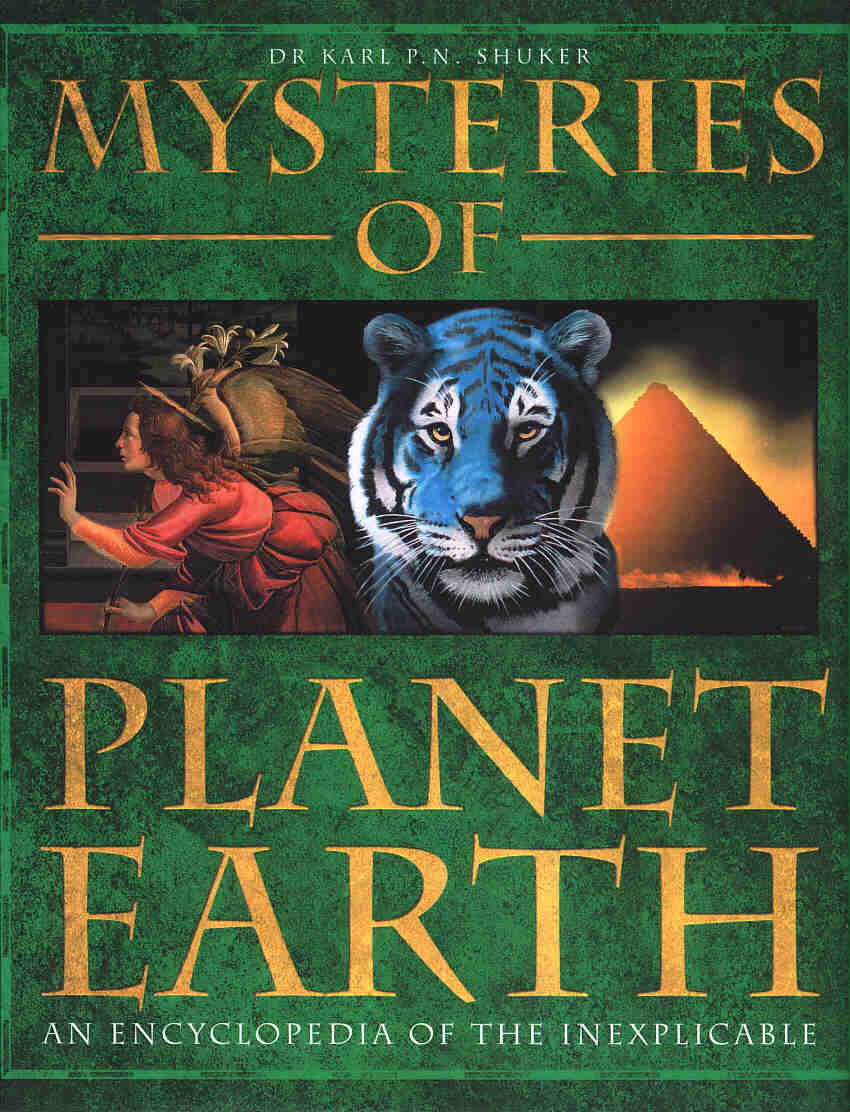 Notwithstanding every advancement made by science down through the ages, humanity's continuing efforts to elucidate the great ocean of truth have scarcely rippled its dark, shadow-dappled surface, let alone penetrated its opaque and fathomless depths. Our planet is still a realm replete with mystery, an island of inexplicabilia drifting passively upon the ever-trembling currents of time that emanate from the greatest undivined secret of all, which we call the universe for want of a better name or definition, and it is sheer folly to profess otherwise.

Inevitably, therefore, countless books dealing with a wide range of mysterious phenomena have appeared over the years. Unfortunately, however, such books all too frequently concentrate upon the more famous or generalised examples of inexplicabilia, at the expense of an extraordinary wealth of additional cases that are more specific and far less familiar - but certainly no less interesting.

In stark contrast, this latest book by Dr Karl P.N. Shuker purposesfully focuses its attention upon a veritable treasure trove of hitherto little-publicised yet compellingly strange, thoroughly fascinating mysteries of every kind, but all directly linked with planet Earth. Many have not previously been documented at all, or have until now been confined to obscure, relatively inaccessible journals or specialist publications, and thus have never been featured before in a mainstream popular-format book. Faced with the daunting task of instating a measure of order and conformity upon this eclectic corpus of inexplicabilia, its contents have been divided into three sections - dealing respectively with the natural world, the supernatural world, and the vanished world.

Subjects surveyed in the natural world's section include a unique array of hitherto-obscure but truly outstanding mystery beasts relevant to the fledgeling investigative science of cryptozoology (from the veo, cuino, earth hound, and Edwards's Jamaican mystery parrot portrait, to the Quasimodoesque izcuintlipotzotli, Steller's sea raven, and Lake Myllesjön's whale-fish - to mention but a few!); a diverse assortment of mystifying anomalies in the fields of animal behaviour and morphology; controversial flora of many kinds; and some very bizarre geological and meteorological oddities; as well as a captivating selection of unexpected aerial and aquatic phenomena, all well-deserving of mainstream attention.

The supernatural world's section contains a spine-chilling phantasmagoria of incorporeal incongruities, and other paranormal entities of the weird but very wonderful variety; exceptional psychic facilities and phenomena seemingly transcending current frameworks of knowledge; plus an astounding array of religious wonders and marvels from around the world that continue to defy rational, scientific elucidation.

The vanished world's section unfurls mysteries from (or in some manner linked to) the distant past and bygone ages. These include mystifying artefacts or constructions whose very existence indicates that some civilisations possessed certain facets of knowledge far earlier in time than present-day science is willing to accept; evidence that several regions of the world were visited by ancient voyagers long before these regions' 'official' dates of discovery; and the exciting prospect that certain figures, creatures, or events in world mythology and folklore may actually have a firm basis in reality (including everything from archangel feathers, golems, and murderous master otters, to monastery imps, sea nymphs, and even an occasional unicorn...or two).

Equally significant are this book's numerous sumptuous illustrations, which include an impressive number of top-quality, full-colour pictures that have never previously appeared in any book. Notable among these are the many examples of beautiful artwork by William M. Rebsamen, emphatically establishing himself as America's finest cryptozoological artist.

The sceptics and cynics of this world have little patience with mysteries. They choose only to see what they can comprehend, or expect - in their eyes, therefore, our planet has few if any major surprises still to offer. Conversely, anyone reading this ground-breaking, eye-opening new volume by Dr Shuker will henceforth undoubtedly share the view eloquently expressed by naturalist Loren Eiseley in one of his own works: "Things get odder on this planet, not less so".

"Without a doubt, this must be the book of the year. Even before one opens the cover up the sheer quality of the publication grabs you. It is plush and impressive and the contents match the sleeve. This is Karl's finest work since The Lost Ark and is crammed so damn full of new information you just don't know where to begin. I pride myself in cryptozoological knowledge but there's stuff in here I've never heard of. Earth hound, weird subterranean carnivores that burrow into graves to devour cadavers, the sandewan, a Zimbabwean entity whose calling-card is a constant trail of blood, giant blue eels in the Ganges, and legions more. Reading this book I felt like a kid at Christmas unwrapping exciting new gifts of cryptozoological information."
Animals and Men, No. 20 (December 1999).

"Dr Karl Shuker stands head and shoulders above his peers. In his latest book, Mysteries of Planet Earth, he uncovers a veritable treasure trove of world mysteries, some of them previously so obscure that even the most dedicated fortean investigator can only gasp in amazement at Shuker's diligent research."
The Planet on Sunday, 5 December 1999.

"Shuker returns with another excellent offering that focuses its attention upon a veritable treasure trove of hitherto little-publicized, yet thoroughly fascinating mysteries. Divided into sections dealing with mysteries of the natural, supernatural, and vanished worlds, the book is beautifully illustrated with a host of interesting full-colour pics and is thoroughly reseached, just as one would expect from Shuker. Many of the cases within have not previously been documented at all, or have until now been confined to obscure, relatively inaccessible journals or specialist publications, and thus have never been featured before in a mainstream popular-format book...a top-quality book that could grace any coffee table. Highly recommended."
The X Factor, No. 79 (December 1999).

"Dr. Shuker's newest book holds up to the standards of his previous books, such as The Lost Ark: New and Rediscovered Animals of the 20th Century, Extraordnary Animals Worldwide and In Search of Prehistoric Survivors. Its broad scope covers not only elements of cryptozoology and more exotic forms of zoological study, but also a variety of fortean style items...Dr Shuker is renowned for his work in many of the lesser-known cryptids of the world. And within the pages this attribute is admirably carried out when dealing with such mystery animals as the Izcuintlipotzotli, the Veo and the Koao. Another side of Dr. Shuker's work has been with feline mystery animals, and again entries on multicoloured felines are present. Particularly of interest is the section entitled Technicolor Tigers, in which the Fujian Blue Tigers, Golden Tabby Tigers and Pseudo-Melanistic Tigers are discussed. The other key ingredient in the book is the lavish illustrations and photographs. These add vivid images to the subjects at hand, be they of the human variety or animal variety. Shuker even dedicates the book to an artist, dubbing William M. Rebsamen the "...Audubon of cryptozoology". A fitting tribute to the artist who has rendered such vivid images as the blue tiger (featured on the book's cover)...Whether your interest lies in the possibilities of luminescent reptiles, questionable cross-species and cross-genus breeding, trees of terror, O.O.P. animals (out-of-place animals), or Kada Codex hand of fire, crystal skulls, and the Minaret skull the book offers you the opportunity to take a forteanian field trip across the globe. Full of original research by the author, and a bow of his head to others for their research, the book is a guaranteed success to those with the willingness to learn visually through art and visually through words."
Craig Heinselman - Crypto, Vol. 3, No. 1 (January 2000).

"Shuker's follow-up to The Unexplained finds him scouring the annals of forteana for a fine selection of less familiar tales...Shuker is careful to ensure that each subject is treated with the scepticism it deserves, being afraid neither to leave the doors of possibility slightly ajar, nor, when necessary, to slam them firmly shut. An index and bibliography make this useful as a reference...An excellent compendium of curiosities."
Mark Pilkington - Fortean Times, No. 132 (March 2000).

"Dr Shuker has an especial knack for surveys of strange phenomena, whether cryptozoological in nature - or of greater sweep. This volume should be attractive to everybody because many of its mysteries will be new to a majority of readers...The visuals adorning this Shuker work are beautifully designed and chosen, and few of the photographs and illustrations are familiar...Because Shuker chose to deal with the less-known inexplicables, the book avoids the repetition so common in books of this type. Because of his wider range of knowledge than most in the field, his latest collection should appeal to all forteans and much of the general public."
Douglas Chapman - Strange Magazine No. 21 (Autumn 2000).

"This is an excellent book. Karl's text enthrals as he pursues the probable realities behind the seemingly incredible sightings, and the many colour photographs have been carefully researched to add to the enjoyment."
Trevor Beer - Western Morning News, 28 November 2000.