The Menagerie of Marvels - A Third Compendium of Extraordinary Animals 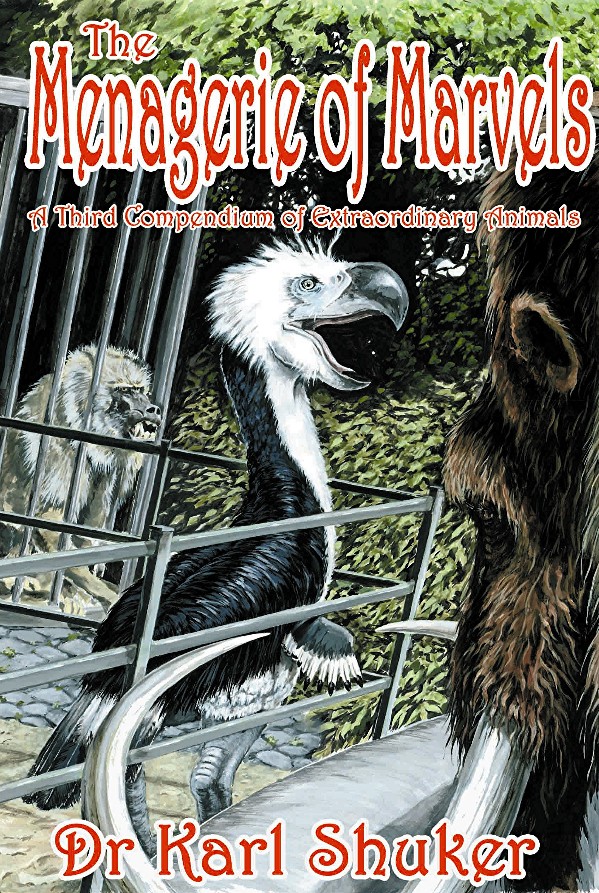 
Available in paperback from Amazon.com , from Amazon.co.uk , from all good bookstores, and directly from the publisher, CFZ Press, in quantities at: www.cfz.org.uk

It was way back in 1991 when my second book, Extraordinary Animals Worldwide, was published. Containing accounts of lesser-known cryptozoological beasts and scarcely-known mainstream creatures, and plentifully supplied with exquisite antiquarian chromolithographs, engravings, and other vintage illustrations wherever possible, it purposefully recalled a bygone generation of natural history books, dating predominantly from the 19th and early 20th Centuries, whose subject matter, generally a deft, eclectic interweaving of speculative zoology, the history of animal discovery, and wildlife mythology of the ancients, was popularly referred to by its authors and readers alike as romantic zoology.

Such was the enduring appeal of my book's modern-day contribution to this now all-but-lost subject – indeed, eventually gaining a cult status among cryptozoological aficionados in particular – that I was encouraged to prepare a much-expanded, updated edition, entitled Extraordinary Animals Revisited, which was published in 2007. Updating some of the most popular chapters from the original book and also adding many new ones, it went on to attract an even greater following than its predecessor, and remains in print today.

By 'mixing and matching' cryptozoology with mainstream zoology, these two books have each enabled me to include within a single volume a much greater diversity of creatures than in other works of mine, and in turn have indulged me in my desire to investigate and write about certain truly obscure animals that have long fascinated me. Consequently, it was only a matter of time before I would give into temptation and compile a third compendium of extraordinary animals - and here it is.

So, welcome one and all to my Menagerie of Marvels! Where else would you encounter fairy armadillos and go-away birds, roc feathers and a werewolf paw, a park of monsters in Italy and mystery beasts in the Vatican, whale-headed pseudo-pterodactyls and hammer-headed lightning birds, beech martens in Britain and winged toads in France, an invisible catfish and a dicephalous kestrel, reverse mermaids and the music of Ogopogo, earth hounds, moonrats, kinkimavos, lavellans, nandinias and Nandi bears, ajolotes, bristle-heads, mammoths, hoopoes, gorilla-sized man-eating baboons and giant rhino-eating terror birds, lake monsters and sea serpents, leopons and lizard cryptids, vermiform rock-slicing laser gazers, and so much more too, all within the scenic yet comfortingly-secure confines of a single book?

Enjoy your visit, and return whenever you wish – my menagerie's unique collection of extraordinary zoological esoterica and inexplicabilia will always be here to mystify and mesmerise you anew. You have only to step inside...if you dare!


| Books | Dragons in Zoology, Cryptozoology, and Culture | The Menagerie of Marvels | A Manifestation of Monsters |