A Manifestation of Monsters - Examining the (Un)Usual Subjects 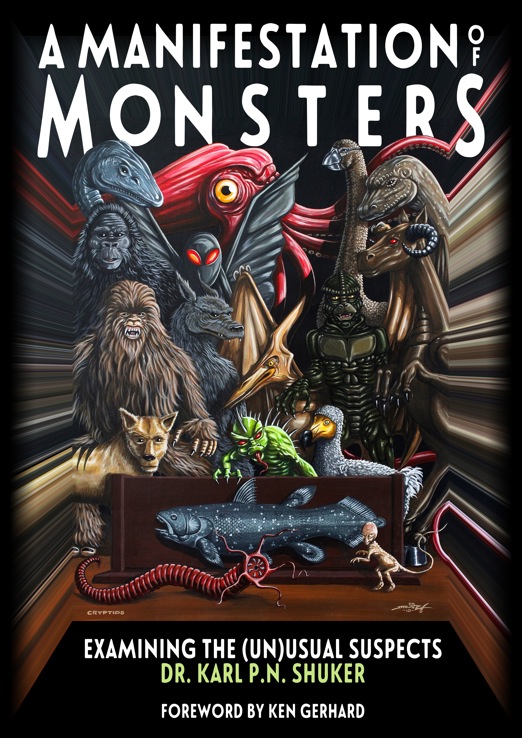 
Available in paperback from Amazon.com , from Amazon.co.uk , from all good bookstores, and directly from the publisher, Anomalist Books, in quantities at: www.anomalistbooks.com

During the 30 years in which leading cryptozoologist Dr Karl Shuker has been investigating and documenting mystery creatures, his writings have been guided by countless different inspirations, but what inspired this present book was a spectacular work of art. Namely, the wonderful illustration that now graces its front cover, which was prepared by Michael J. Smith, an immensely talented artist from the USA, and which Dr Shuker first saw in 2012. It depicts no less than 17 cryptids and other controversial creatures, including the Loch Ness monster, bigfoot, coelacanth, mokele-mbembe, Jersey devil, chupacabra, Mongolian death worm, Tasmanian wolf, dogman, giant squid, skunk ape, and dodo.

Ever since seeing it, Dr Shuker's notion of preparing a book inspired directly by this painting and the eclectic company of entities that it portrays has always stayed with him, but the fundamental problem that he faced if he were to do so was how to categorise them collectively.

What single term could be used that would effectively embrace, encompass, and enumerate this exceptionally diverse array of forms, as well as the range of additional creatures that would also be included in the book? 'Cryptid' was not sufficiently comprehensive, nor was 'mystery creature' or 'unknown animal', because some of the depicted beasts seem to exist far beyond the perimeters - and parameters - of what is traditionally deemed to be the confines of cryptozoology. Consequently, Dr Shuker eventually concluded that there was only one such term that could satisfy all of those requirements – indeed, it was tailor-made for such a purpose. The term? What else could it be? 'Monster'!

Derived from the Latin noun 'monstrum' and the Old French 'monstre', 'monster' has many different modern-day definitions - a very strange, frightening, possibly evil (and/or ugly) mythical creature; something huge and/or threatening; a malformed, mutant, or abnormal animal specimen; and even something extraordinary, astonishing, incredible, unnatural, inexplicable. These definitions collectively cover all of this book's subjects – and so too, therefore, does the single word 'monster' from which the definitions derive.

Thus it was that this became a book of monsters, but not just a book – a veritable manifestation of monsters. That is, a unique exhibition, a singular gathering, an exceptional congregation of some of the strangest, most mystifying, and sometimes truly terrifying creatures ever reported - still-unidentified, still-uncaptured, still-contentious. Even 'mainstream' species like the dodo and coelacanth, whose reality and zoological identity are fully confirmed, still succeed in eliciting controversies, and are veritable monsters - the dodo having been referred to by various researchers as a monstrous dove, and the coelacanth as a resurrected prehistoric monster.

So, if you're looking for monsters, you've certainly come to the right place, and purchased the right book. Just pray that once you open it and encounter the incredible creatures lurking inside, you don't live to regret your bravery – or foolishness - in having done so. In fact, just pray that you do live...