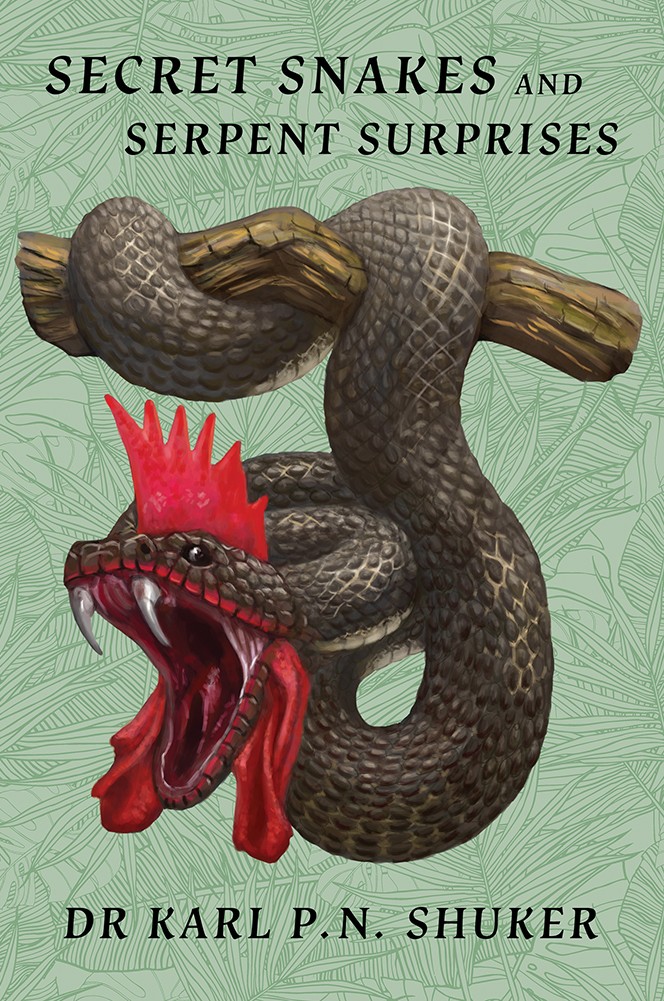 
Available from all good bookstores, including Amazon UK and Amazon USA.

Few creatures divide human opinion so diametrically regarding their perceived benevolence, or malevolence, as do snakes – the eternally-cursed serpent kind according to Christianity, the most divine and blessčd of reptiles according to Hinduism, vilified and venerated, sanctified and demonised, passively protected, actively annihilated, often overlooked, but never deemed not worthy of notice if or when encountered.

This is especially true, moreover, when investigating whether our world may contain extraordinary snake forms still undescribed by science and also whether snakes can exhibit bizarre behaviour presently deemed scientifically improbable.

This uniquely engrossing book provides the most extensive survey of secret snakes and serpent surprises ever published, in which leading cryptozoologist Dr Karl Shuker examines such varied envenomed and constricting controversies as Africa's crowing crested cobra, mystery snakes of the Mediterranean lands, the Mongolian death worm, North America's boss snakes, and Parker's serpentine slayer from Papua, plus St John's viper, the Virgin Mary snakes, and the pre-cursed Eden serpent, Kipling's Karait and Sherlock Holmes's Speckled Band, gargantuan anacondas with horns and the tiny but terrifying pichu-cuate, hairy snakes and feathered serpents, Glycon the talking horse-headed ophidian deity of ancient Rome and venerated king cobras, not to mention vast serpent kings and venom-quelling snake-stones, serpents that shriek, jump, fly, and hypnotise their prey, and much more too.

So prepare to be fascinated – but only in the most harmless, non-lethal manner! – by the ophidian offerings revealed here. However, it may be best not to stare too long into the eyes of any of the limbless ones portrayed in this book's comprehensive collection of illustrations, just in case...