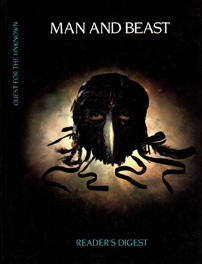 For the fundamental purpose of survival, from the very earliest times man has sought to learn as much as possible concerning the wildlife sharing his world - enabling him to safeguard himself and his clan against hostile creatures, and to exploit less dangerous ones for the improvement of his own lifestyle. Even today, man continues his unending quest for knowledge concerning every aspect of those creatures existing alongside him, a quest that takes him along a multitude of different courses, including some extremely mystifying and controversial ones.

Among these is his longstanding search for elusive animals whose existence has yet to gain official recognition from science - a search that has lately become the driving force of a newly-emerging discipline called cryptozoology. They also include his attempts to retrace his species' social, cultural, and intellectual development - during which many of the beasts sharing his immediate surroundings were revered by him as gods (or were deemed by him to be the personification of gods).

Some, moreover, were elaborated by his creative imagination until they became completely fictitious fauna, populating only his folklore, his dreams, and sometimes his nightmares. And there were those that even became an intrinsic, mystical component of himself, in those many instances featuring persons who believed that they could directly transform themselves into animals.

This lavishly-illustrated volume, whose consultant is a highly-renowned zoologist and whose contributors are leading experts in the fields of cryptozoology and mythology, surveys the vast diversity of these multifarious links between man and beast - exposing their origins and functions, and seeking explanations for those many facets of these subjects that currently remain a mystery for modern-day mankind.